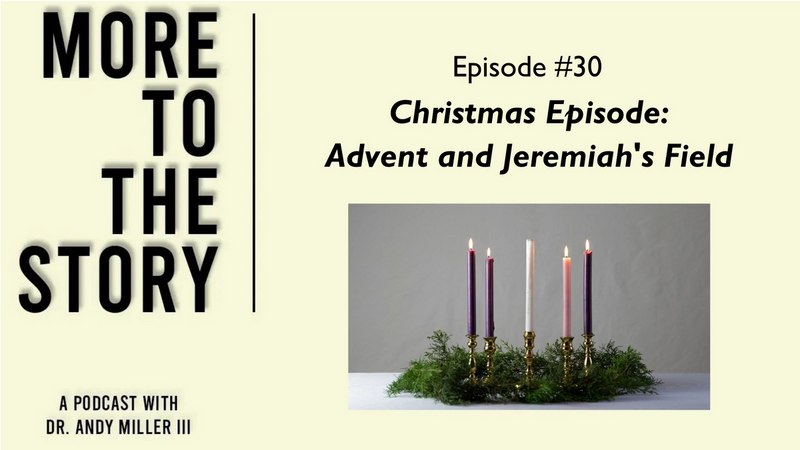 Friends, Here's a link to my Christmas episode -

A few months ago, there was a moment where I realized I was out of control. The boys and I lined up on the only public ice-skating rink in the state of Alabama, in the center of the Birmingham Mall (think synth-bass notes from Amy Grant’s 1980a Christmas Album, the song Immanuel). We looked down the ice, and I counted “three, two, one go!” And we were off racing. I had a confident lead and was looking back at the boys; Titus was on my heels. About four seconds into the race, I realized I was headed toward the wall, and the line we had arbitrarily set for the end of the race was quickly approaching. Then the thought came to me, “how am I going to stop? How are any of us going to stop?” Approaching the finish line. I tried to slow down, to no avail, and fell on the ground and slid into the wall. Meanwhile, Titus didn’t slide, but surpassed me and won the race. About half a second later, Titus slammed into the wall like an NHL player being checked by an opponent. We were all lying on the ground wiped out. There was a moment where I was flying high, going so fast, and feeling so good about myself but I didn’t realize was out of control.

The first Christmas might have seemed out of control too. Mary, Joseph, and the baby Jesus traveled 90 miles from Nazareth to Bethlehem because of the dictates of Ceasar Augustus and his census, a Mary ready to deliver, and no room in the inn as the world seems to be out of control. What is it that God is calling us and reminding us to think of this season in the mess of this season? What is the point of Advent, a celebration of coming, anyway?

Jeremiah was in a position where most of his life he was prophesying that Jerusalem, Judah, was out of control and headed toward a disaster. He prophesied regularly against kings, false prophets, religious leaders, and the people of Judah, that their demise was coming unless they repented.

Jeremiah could only say what was from the Lord. He was not going to make something up, and his prophecy was coming true. In verse 32:2 we are told that “At that time the army of the king of Babylon was besieging Jerusalem, and Jeremiah the prophet was confined in the courtyard of the guard…” Then later in the same chapter we read that, “siege ramps are built up to take the city…[by] sword, famine, and plague the city will be given into the hands” of the enemy.” 32:24

Jeremiah was trying to clue them in to the fact that they were in a mess, but the king refused to see it even though their city was falling before them.

During this time Jeremiah is confined in the palace. He is basically in prison because he spoke the word of God. It’s while he is in this position that something strange happens.

Jeremiah’s message in the middle of this war zone is this, “Jeremiah, this the Lord, your cousin is going to come and sell you a field, I want you to buy that field and use all of the appropriate legal mechanisms to do so.” 32:6-12

Even Jeremiah gets to a place where he seems somewhat skeptical as to why God would ask him to do this in the middle of a messy situation. 32:17 says, “Ah, Sovereign Lord….” Or “Ah, Lord God…” Dr. Terence Frethem is an OT scholar who taught for decades at Luther Seminary, and he suggests that this is “an expression of uncertainty or puzzlement.” (Jeremiah, 460). It’s like he is saying, “Um… Lord? Yeah…you can do any and everything….you can certainly work in this situation, but do I need to buy a useless piece of land when our land is going to be taken over any minute by the Babylonians?”

Our world is experiencing all kinds of problems. The siege ramps are positioned, and it feels like our society is falling around us. In his 1984 Harvard address, Alexander Solzhenitsyn said, “the west on the edge of an abyss.” We see in the news this week the challenges of Russia assaulting Ukraine, China seeking to attack Taiwan, and Iran wanting to develop a nuclear missile. Challenges to society, people put their sexual lives above their communal responsibility. Abby found dozens of books in our library advocating LGBTQ issues as a way to influence children. Meanwhile, the church has not responded well to the COVID-19 crisis. And we might wonder what is up in our society? Like Jerusalem, we are under siege. It seems like “siege ramps are built up to take the city.” (32:24). Personally, you might feel that way too: you experience loneliness in the holiday season, you’ve lost a loved one in the past year, your family has changed, you’ve been confronted with a challenge at work or school, you’ve given in to temptation, you’ve questioned if God is real, and you have doubts.

We might look at our lives, our context, and like Jeremiah, the city falling around him, and like Mary and Joseph with no room in the inn say, “Lord, what are you thinking? You want me to buy a field? The savior of the world is going to be a baby?”

In the middle of a meltdown: social, political, and spiritual; God does something unexpected, he asked for the unexpected. He says, “Buy a field, Jeremiah.” He says to the first-century world looking for a military and political leader, “this will be a sign to you…you will find a baby.” He’s the messiah you’re looking for. A baby as messiah? A field, now?

One of the most powerful words in this passage comes at the moment of Jeremiah’s bewilderment, God in verse 32:15, says, “For….” Substantiation (effect – cause), is the outcome and the reason you will understand later. I want you to act this way (e.g. buy a field) because I’ve got something coming your way. Don’t overlook the power of the word ‘for.’

“For this is what the LORD Almighty, the God of Israel, says: Houses, fields, and vineyards will again be bought in this land.” 32:15

Jeremiah was asked to buy a field when buying fields seemed like the last thing he should do. Jeremiah was asked by God to act irrationally. God was saying he had a plan for his people, for Judah, even though the destruction was in front of them.

The parallels in this story to the incarnation are interesting to me. Jeremiah was asked to buy real land, with real dirt, in a real city. The eternal second person of the Trinity, Jesus became a real human, in a real city, stepped on real dirt, and entered in to offer real redemption.

Too often we look at Christmas and Advent as if it is only a celebration of Jesus’ birth. Advent is not only a celebration of Jesus’ first coming but also the time of year where we focus on Jesus’ second coming. Traditionally, Advent is the start of the Christian year, and we start that year by re-orienting ourselves to the fact that Jesus not only came but is coming.

It’s interesting to me that Jeremiah most likely goes into captivity in Babylon. We don’t hear from him again. Even though Jeremiah purchased this land, he likely never used it. It was only a sign. Jeremiah was asked to buy a field as a sign of what is to come.

The shepherds were asked to see a sign, “This will be a sign to you…” Even for the shepherds their redemption had come but was still coming. The plan of redemption was still being rolled out. That’s where we are too. We know of Jesus’ preexistence, his incarnation, his life, his substitutionary death, his defeat of death, his resurrection, his ascension, and his enthronement at the right hand of the Father. Still, the completed plan of redemption is being played out as we anticipate Jesus’ return.

In our last appointment, in Tampa, FL, we drove a car that belonged to The Salvation Army. We were the sixth officers to drive that car and it was falling apart. Three times in two weeks that car broke down on us. The final time was the last straw. It was a Saturday and Abby and I had just had an afternoon date at the orchestra hall in Tampa and were headed out for a nice meal when the car was “dead as a doornail” on a busy road. We got the car towed and our evening was over.

By Monday, I came to Pep Boys, where the car was towed, to take a picture of the car so I could sell it as a trade-in. I was escorted into the bay, given a hardhat, and ready with my camera app opened on my phone. The mechanic heard I was selling it, and he came over to me saying, “You can’t sell this car! This is a great car, it has much more life in it. You are out of your mind to see this car.” I told him how it broke down on me three times in the last week and how it was simply time for something different. In order to take the picture, I realized that I had to kick the bumper in place for the sake of the picture. As I kicked the car, the Mechanic came and grabbed me by the shoulders and say, “No, no, no…this is a great car.” Then to my surprise, he got down on his knees and started petting the car say as if talking to a child, “There, there…you’re a good car…you’re a good car. Daddy loves you [looking at me with a frustrated look]…he just doesn’t know how to show it.” Despite his efforts, I ended up selling the car once it was fixed. That mechanic could see something in my car that I couldn’t see.

1. Some people listening to this podcast need to “buy some land” today. Here’s what I mean by that. Claim what God is going to do. Claim Jesus and his second coming and his power for us today. Heaven is not a mere spiritual place; it is a new heaven and earth. It is a touchable physical reality. We need to claim our dirt, our world as the place this is going to happen.

Why? Because as Handel portrays so well in music, “And he shall reign forever and ever…hallelujah.” “King of kings and Lord of Lords!”

2. Don’t play around with watch unreal, get real, buy some land, be like Jesus.

Then our eyes, at last, shall see him

No more let sins and sorrows grow, nor thorns infest the ground; he comes to make His blessings flow far as the curse is found.

Lo, He comes on clouds descending, once for favored sinner’s slain...alleluia. God appears on earth to reign.