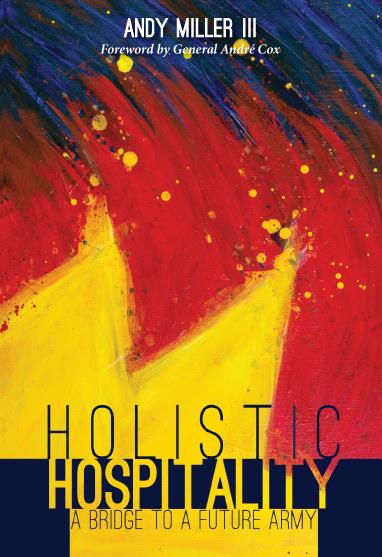 Holistic Hospitality: A Bridge to a Future Army

Here is an excerpt from my book, Holistic Hospitality. If you are with the Salvation Army's Southern Territory you can use your account and order it from trade@uss.salvationarmy.org. Or preferably you can get a copy of it on Amazon here. This chapter is based on a sermon I preached in Arlington, Texas. The rest of the book develops the historical, theological, and practical dimensions of this command from Paul.

Love must be sincere. Hate what is evil; cling to what is good. Be devoted to one another in love. Honor one another above yourselves. Never be lacking in zeal, but keep your spiritual fervor, serving the Lord. Be joyful in hope, patient in affliction, faithful in prayer. Share with the Lord’s people who are in need. Practice hospitality. —Romans 12:9–13

I wanted to leave, and no one would have blamed me. I could see nothing but an ocean of gold and dark blue. There had to be 40,000 people looking down at me, and not one was glad to see me. I was at the bottom of the section, and our tickets were marked NN, so our seats were far past the Z section, at least 40 rows away. As I looked up, my legs tightened for the climb ahead.

My parents, who were then serving a Salvation Army corps in St. Louis, had gotten us the tickets to see our team, the Chicago Bears, play the high–flying, “greatest show on turf,” St. Louis Rams. But it was a Sunday game, and there was no way we were getting out of church early. So we arrived at the game in the middle of the second quarter. The fans were all in their seats as my family walked in. My brother and I, with our Bears jerseys and other fan gear on, tried to balance our food as we walked up the seemingly endless staircase. You can imagine the interesting and colorful language that was flying in our direction. Talk about feeling out of place! We wanted to leave, but we “hung in there” even in the face of defeat. I have never felt as unwelcomed by so many people as I did that day. People did not want to make room for us in their stadium.

Have you ever felt unwelcome? Your experience might not be as dramatic as being outnumbered by thousands at a football game. Maybe you moved to a new town or stepped into a new school. Maybe you were sent in to replace someone else on a job, or you had to give someone an assignment you knew they didn’t want. Sometimes when people are forced to make room, they are not very welcoming.

Or have there been times when it was you who didn’t want to make room? I grew up in a family with four kids (I was the oldest), so private space did not exist in our house. As most Salvationists know, the Army owns the houses of officers. On one occasion, we moved from a five–bedroom house to a three–bedroom one. Well, I did not want to give up my space and “make room” for my brother.

Reading Romans 12:9–13, it’s easy to jump past some of the commands Paul gives. The text seems like a typical list of “do’s” and don’ts.” In just the first few verses we read: “Be devoted … honor one another … never lack in zeal … keep your spiritual fervor … be joyful in hope … be patient … be faithful in prayer … share … ” (vv. 9-13). The list is much like what my wife, Abby, and I said to our son, Andy IV, as he went off to pre–school. Suddenly we felt the need to summarize everything we had taught him in three years of life: “Ask for help, say please, eat your food, tell your teachers when you have to go … ” (Then we cried because we saw the inevitability of our son’s growing up.)

After Paul’s list of admonitions, he writes one command in a sentence that takes two words: “Practice hospitality.” The force in the original language is hard to communicate. In Greek, it is as if Paul underlined this word and made the font extra large, extra bold, with italics: “You must practice hospitality.” Or it could be translated, “Pursue hospitality.” The word here for pursue was often used to describe a hunt or a vigorous chase.

The backstory of this letter is that Paul was writing to Christians in Rome whom he had not met. The church there was not a big group that came together in a large cathedral. Instead, there were small churches that met in homes. What was distinct about this Christian population was that some were Christianized Jews and others were Gentile Christians. In 49 A.D., the Jews in Rome had been exiled, and this letter was likely written as they were returning from that exile. The two groups had to learn how to love each other and exist as “the church” in Rome. You can imagine that they might not have wanted to get along. Paul was giving them this command to practice hospitality because it was something that they lacked. He needed to say, “Be devoted to one another in love” (12:10), and “Share with the Lord’s people who are in need” (12:13). Maybe these Christians needed to be challenged to make room for each other.

We live in a very inhospitable time. As a society, we don’t want to make room for anything. We don’t want to make room for others, especially strangers. Even though I meet strangers who are looking for help every day right here in my office, it is easy for me to say to myself, Don’t they realize that I am behind on a hundred emails, and our Angel Tree application process doesn’t start for two weeks? Can’t they read the sign on the door? In our increasingly isolated world, it is also easy for us to stick with the friends we have on Facebook, the contacts in our email list, or the people we see on a regular basis. We don’t have time for new people—for strangers.

Today, the word hospitality has come to be associated with the hospitality industry or conversation over coffee at someone’s house. But until the last 300 years, the word was specifically understood as a Christian practice. So the root of the word, hosp, is found in the words hospital, hostel, and hospice. The idea was that Christians had a duty to make room for strangers.

God didn’t have to make room either. These problems in our world are not His fault. Sin is not His fault. God created our world for us, but our corporate sin in Adam has brought us to a place of rejecting all that God has given us. Our sin separates us from God; our selfishness keeps us from looking at anyone beyond ourselves; and those things that we know have moved against God’s direction in our lives give God every right to say, “I don’t have to make room.”

But thanks be to God that in Jesus Christ, God made room for us. We don’t deserve the mercy of God as He stepped out in time in the person of Jesus Christ to welcome us. When our world is blind and looking for its way, Jesus steps in as the Savior for all of humanity to offer us salvation—to save us from our sin, and to offer us a new way of understanding and looking at the world.

Later in Paul’s letter, he challenges the believers in Rome to, “Welcome one another, then, just as Christ welcomed you, for the glory of God” (15:7, NRSV). How did Jesus welcome us? He welcomed us on the Cross. While I was a cadet at the training college in Atlanta, I often I went out on our canteen ministry, where we interacted with people living under bridges on a weekly basis. One man became my friend. He said to me one day, “I know why you do this, ’cause of what He [finger pointing up] did.”

In other words, we help people not to make ourselves feel better but because Jesus has welcomed us.

I suggest that we would do well to reframe our ministry in The Salvation Army. We should not be simply “doing social services” or “opening a shelter.” Instead we should be opening ourselves, our resources, and our buildings, as we are commanded to do, in light of Christ’s making room for us. We should practice hospitality.